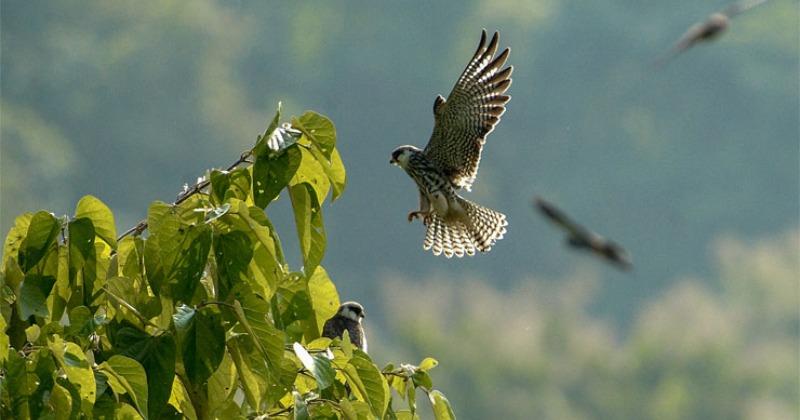 Kerala-based Leopard Tech Labs has ventured into conservation technology with the launch of a Sarpa app for snakes. The company was incubated in the startup valley at Amal Jyothi College of Engineering in Kanjirapally, Kottayam by two techs Allen Shaji and Sobin Mathew. In 2018, Leopard Tech Labs first developed a system for the Kerala Forest Department with the Wildlife Trust of India (WTI). “Hostile Activity Watch Kernel” (HAWK) was launched by Kerala Forest Department to digitally document wildlife crimes after the ivory poaching case in 2015. Today Kerala Forest Department has fully migrated to this system, moving from a manual documentation process to a digital documentation process, in a first-of-its-kind initiative.

Allen Shaji and Sobin Mathew, co-founders of Leopard Tech Labs, talk about their conservation technology wing and their work on HAWK.

How HAWK was launched…

We have a conservation technology wing at Leopard Tech Labs and have already developed wildlife apps. We developed HAWK with Wildlife Trust of India and the Forest Department. This happened after the ivory poaching case in 2015.

The Forest Department’s main concern was that after a wildlife crime, everything was documented manually. So the initial discussion was how can we automate the system.

The preservation technology has not been explored much in India by technicians, but it has a lot of potential. There is a lot to do for conservation.

Before HAWK was initialized, officers had different types of forms, arrest notes. The incidence of human-made errors, missing padding information, was occurring. Here, after 24 hours of reporting a violation or entering a violation on the portal, the portal will be locked, and no one will be able to update the information or manipulate it.

What is the HAWK?

HAWK is a wildlife crime intelligence collection system. With the latest digital technology, the system consolidates all information to determine key crime factors or a possible crime scenario.

Where and when was it launched?

The pilot phase started in five ranges in Kerala, in 2019. We created the initial modules and presented them to the forest department. Based on input provided by officials, the system was developed.

In court, several documents must be presented when a case is charged. HAWK can generate all of these documents with minimal data entry.

The main thing here is accuracy. With these minimum data, accurate information can be given. When a file is registered, senior officials receive a message by SMS and e-mail. This makes monitoring more efficient.

Also, when the crime is recorded or documented, senior officials can verify it; such options are available. If there is a problem in the document, they can reject it. If there are errors, they can ask them to correct them.

Along with this, we have developed wildlife death management software named shikra. If the death of wild animals occurs inside or outside the forest, they must also register it, which again is notified to senior officials. In what range did it happen, whether it was poaching, electrocution, predation, hunting, natural death or any disease – all these causes of death are listed, almost 14 to 15 cases. In parliament, when questions are asked about the death of wild animals, this information is now taken from HAWK. With just one click, for example, senior officials can get a report on how many tigers have died in a year.

We have also introduced a “repeat offenders” section where we can fill in the physical details of the offender. If he has committed two or more crimes, he will also be marked as a repeat offender. For example, if the same offender has committed a crime in Palakkad, Walayar and Thiruvalla, the system will say that he is a habitual offender and he could commit more crimes.

Analysis of the HAWK data would be very useful after five years. For example, when an animal dies, what could be the reasons, time of death, etc. It could be a specific species, or a place, a group where crimes happen more. The Forest Department will investigate this.

The author is a multi award-winning environmental journalist based in Coimbatore. This story was produced with support from the Oxpeckers Grant to Investigate Wildlife Crime.