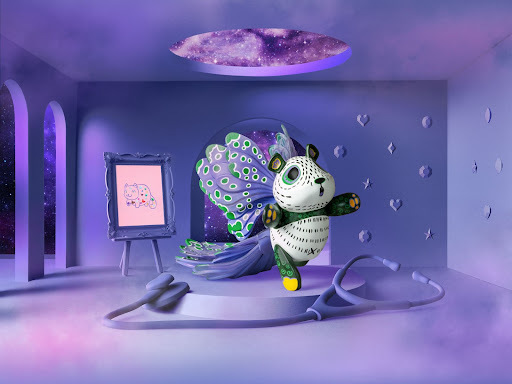 In early 2022, four patients from Doernbecher Children’s Hospital, a visual artist and an advertising agency joined forces to form the Amino Project, a collaborative art production that transformed the drawings of hospitalized children into 3D sculptures.

The result was a series of colorful 3D-printed models inspired by the alebrijes, or spirit animals, that represent the souls of people in folk art from some indigenous Mexican cultures. Each sculpture was designed by a child patient at Doernbecher before being brought to life through digital modeling and 3D printing technology. Once rendered in physical form, the sculptures were given additional color and personality thanks to contributions from Tekpatl, a Portland-based Chicano artist. Tekpatl painted each of the sculptures by hand, giving each its own unique set of patterns and colors so that no two Aminos are the same.

For Meral Middleton, one of the initiators of the project and co-founder of INDUSTRY, the firm that printed the Aminos, the choice to draw inspiration from the alebrije tradition was deliberate.

“We realized that sickness and loss are painfully taboo today,” she said. “But many Indigenous cultures openly acknowledge these moments, often using art to share the story.”

For Middleton, the need to share stories of loss is personal, which informed her work on the project. She and her husband lost their baby girl in 2012, a tragedy she finally voiced in the Aminos Project. One of the five Aminos, a hummingbird, is meant to represent the soul of Middleton’s child.

“She is our hummingbird, peacefully suspended in time and then gone just as quickly,” Middleton said. “To us, his spirit animal represents change, lightness, harmony and healing.”

The other four Aminos, created by children who were active patients at Doernbecher, were designed over several creative sessions.

Alissa Wang, industrial designer at INDUSTRY, said that in addition to creating the designs for the sculptures, the sessions also created a unique experience for the children.

“The alebrijes provided an educational opportunity for the children we worked with,” she said. “The end result was extremely powerful. We were really able to tap into the personality of each Doernbecher child. »

After the final designs were completed, the Aminos were hand painted by Tekpatl. For him, the appeal of the project lies in its ability to represent the creative spirit of the children who designed it.

“I resonate with the story behind the alebrijes,” Tektatl said. “The original artist channeled his mind and creativity to create a tangible version of his vision.”

Although he was an experienced visual artist, the small size of the Amino project required an extreme level of attention to detail.

“When painting the Aminos, I had to slow my breathing to paint all the little details,” Tekpatl said.

The final product, after Tekpatl’s input, was a set of unique animals, each transformed from children’s drawings into holdable 3D sculptures. Doernbecher and the INDUSTRY team plan to hold a raffle for the Aminos, with proceeds going to children’s hospital medical programs.

For Middleton, this was one of the goals of the project, in addition to creating a space for patients to communicate their stories through art.

“We created Project Animo to give back,” she said.