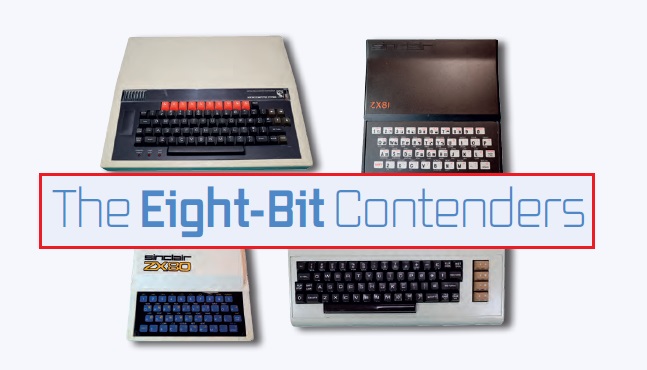 In the 1980s, owning a computer became a possibility for the masses. In the beginning, personal computers were not cheap. But that changed with a computer costing less than £100 ($137).

With a whiff of futurism lingering in the air thanks to NASA’s space shuttle and the microprocessor an established part of the semiconductor industry, owning a computer in the 1980s became a possibility for the masses. The MITS Altair 8800 minicomputer, using Intel’s eight-bit 8080, had sold in the thousands since 1975 but, without a keyboard or monitor, it could not be described as simple to program. At $439 for a self-build kit and $621 assembled, it wasn’t cheap either. That all changed with the launch of a personal computer for under £100 ($137). Let’s take a look at the history of personal computers.

The 1980s: the first personal computers

In the early 1980s, three key computers were already on the market: the TRS-80, the Commodore PET and the Apple II. While the first two machines would leave you with some spare change on $1,000, the Apple II cost $1,295. Their main advantage over machines like the Altair 8800 was their keyboard, monitor (or support for a TV) and – the killer feature – BASIC. Rather than struggling with assembly programming and developing an understanding of microprocessor internals, users could create programs using simple, understandable commands.

In May 1979, the UK FinancialTimes predicted that a ‘user-friendly computer’ with keyboard and screen for under £100 would be on the market within five years. Sir Clive Sinclair and what would become Sinclair Research Ltd. decided to make that future a reality, albeit a little faster. In February 1980 the ZX80 launched for £99.95 or £79.95 if you were willing to build it yourself. Based on Zilog’s Z80, the processor developed by Federico Faggin after leaving Intel, it featured 1 KB of memory that could be upgraded to 16 KB. The input device somewhat stretched the definition of a keyboard, n being just a flat membrane panel to save money. Each keypress caused the display to flicker, which many commented was annoying, but was sold as being “positive feedback” to user input. There was also no monitor included. Instead, users had to hijack the family TV to get their computing fix.

Sinclair BASIC was created by John Grant of Nine Tiles, a consulting company responsible for writing the code. It assigned programming commands to individual keys, so pressing ‘O’ entered the ‘PRINT’ command, and ‘R’ was used to ‘RUN’ the program. Not only did this prevent errors, but it also reduced the amount of memory needed to store programs. Although not ANSI compliant, this version of BASIC fits in a 4 KB ROM alongside all the other code needed to run the machine. With minor software modifications to support different television standards, and thanks to its external power supply, the ZX80 also had some success overseas, and it spawned several clones.

The team reacted quickly to its success by releasing the ZX81 in March 1981. Assembled it came to £69.95 (£49.95 as a kit). The lower price resulted from design optimizations in hardware and despite the larger ROM (8 KB) which allowed for improved BASIC sound. Measuring less than 18cm across and retaining its membrane keyboard, it was sturdy enough to carry to a friend’s house for coding or playing glorious, soundless black-and-white games.

The UK’s public service broadcaster, the BBC, has also decided to champion computer literacy. However, they felt they would need a computer capable of running a standardized version of BASIC to ensure success. A tender process led to the selection of Acorn Computers Ltd. for the development of the machine. They already had a computer on sale, the Acorn Atom (£170), based on the other alternative eight-bit processor of that era, the 6502. With a proper keyboard and built-in power supply, it looked like the machine to come: the BBC microphone.

Launched at Christmas 1981, the Model A, with 16KB of RAM, was priced at £299. The 32KB Model B would cost you £399 (Figure 1). Associated with the BBC’s series of TV programs on computer literacy and government computer grants, the BBC Micro has made its way into schools and colleges across the UK. Despite its early tendency to overheat (due to power supply), it proved to be very efficient. It offered a range of colors and graphics modes, offered three-tone plus noise generators for sound, and was highly expandable. Optional extras included coprocessors (6502 or Z80), speech synthesis (TI TMS5200), and it even offered a network interface, Econet. British students may even remember bringing floppy disks to lessons or typing up stories for the BBC Domesday Project which investigated life in the UK in 1986, storing the results on laser discs.

The BBC Micro sold around 1.5 million units in total, and its very comprehensive BASIC implementation also included a built-in assembler. However, with competitors emerging both in the UK and overseas, its price was too high for many home computing enthusiasts. The Acorn Electron, launched in 1983 for £200, provided the pedigree of the BBC Micro through the use of the same BASIC. However, the 32 KB of memory was quickly consumed by the higher graphics modes, leaving little room for programming. Competition in the home computing market had also become fierce, with comparable computing offering for the same price or less. However, it provided an inexpensive way to play Elite at home.

By far the most successful home computer of the time was the Commodore 64. Often abbreviated to C64, it was also known as the “Brotkasten” (bread box) in Germany (Figure 2). Commodore had already had success with its PET successor, the VIC-20 (VC-20 in Germany), and now had a silicon design and manufacturing facility thanks to their purchase of MOS Technology (MOS), the creators of the processor 6502. Under the project name “VIC-40”, this new machine based on the 6510 (a derivative of the 6502) was to have 64 KB of RAM from day one. It was clear that this would have an impact on the final price but, with memory prices falling, this decision would work in Commodore’s favor over the nearly 12-year lifespan of this machine.

MOS had worked on video and audio chips for the video game industry. Known as VIC-II (Video Integrated Circuit) and SID (Sound Integrated Circuit), they allowed Commodore to produce many parts of the computer in-house. Entering the market at $595, it had fallen below $200 by 1985. Offering Commodore BASIC 2.0 created by Micro-Soft (later Microsoft), it offered users the ability to program and play a range of games . The sound made possible by the SID chip, with its three independent oscillators and attack/decay/sustain/release volume controls, enabled impressive polyphonic audio tracks. The game ghost hunters included Ray Parker Jr.’s dance-pop track in full, with a synthesized callout of the game’s name if you hit the spacebar.

While its disk drives were slower than the competition, some games and software could be run directly from hardware cartridges. Also popular was Simons’ BASIC, a version of BASIC that included improved support for creating graphs, thus avoiding POKEing data directly into the VIC-II. It also offered users a glimpse of future graphical user interfaces with GeOS, where cursor control was provided by a joystick as there were few mice available. In 1993, Commodore’s annual reports claimed to have sold 17 million machines.

Who won? We have all done it!

No doubt readers will have memories of other important 8-bit home computers, such as the Sinclair Spectrum or the Amstrad CPC 464. Hours have been spent typing endless lists of magazines and books, coupled with the reference to a myriad of code deviations to ensure the program worked on your machine. ZX81 users often had to make do with heavily scaled-down versions of programs due to limited memory.

Regardless of the machine used, the home computing revolution of the 1980s gave us a generation of engineers, programmers and game creators. Even Eben Upton, the inventor of the Raspberry Pi, associates his interest in computing with the BBC Micros he used in school. But, as the 1990s arrived, the sound of loading computer code from cassette tapes gave way to the wow and flicker of another sound – the modem connecting us to the internet.

Stuart Cording is an engineer and journalist whose career began with a C64. With over 25 years of experience in the electronics industry, you can read many of his Elektor articles at https://www.elektormagazine.com/cording.

Previous editions of Elektor dating back decades are available in the Elektor USB Archive.