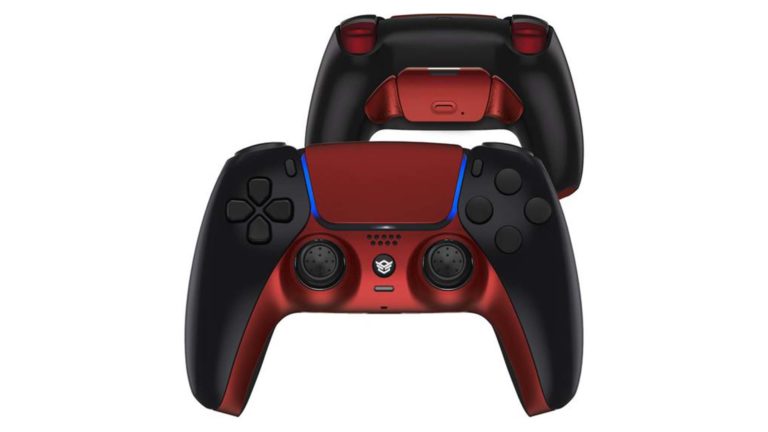 PlayStation 5’s DualSense controller introduced more immersive gaming experiences with its special rumble features. However, many gamers like to have different options for gamepads depending on their preference during gameplay. Although there are not many standard third-party options, some companies create custom versions of the PS5 controller. .

The introduction of the DualSense controller marked an evolution of Sony’s DualShock line of controllers. DualSense upgrades from the DualShock 4’s rumble packs to custom haptics that add more immersion. Along with the new haptics, a repositioned lightbar frames the redesigned touchpad.

Adaptive Triggers also enhance immersion by increasing the voltage in the triggers to simulate the action taking place on screen. games like Ratchet & Clank: Rift Apart and Return use the new triggers to immerse the player and create new shooting modes by pressing the shutter button halfway.

Sony’s DualSense will work with PS4 games in backward compatibility mode. PS4 games that have custom lighting on the DualShock 4 will also work on DualSense.

Since its release, Sony has launched two additional colors for the controller: Midnight Black and Cosmic Red. Of the two new colors, Cosmic Red is the more expensive option. Midnight Black is the same price as the white DualSense. 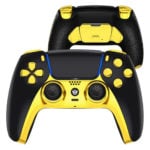 Claiming to have the first Elite controller for the PS5, HexGaming’s Rival controller is a customized version of the standard DualSense. The manufacturer has created a variety of Rival controllers for purchase on its website or on Amazon.

Those interested in owning a Rival controller can customize the look of the Rival and add features such as hair triggers, two reprogrammable rear buttons, and a textured or rubberized back. However, implementing hair triggers on the R2 and L2 buttons will remove the adaptive triggers from the DualSense. 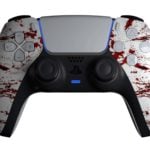 Aim Controllers is another option for purchasing custom or pre-made modified controllers. Like HexGaming, users can access a creation suite on the website and change the color of almost every part of the controller.

The Aim Back Pro grip and paddle configuration is unique to the PS5 Aim controllers. With this feature, the rear of the controller is textured and includes four configurable rear paddles. The user also has the ability to reconfigure the paddles on the fly or simply add the extra paddles to the back. 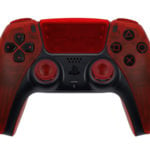 Of the customizable PS5 controllers, Battle Beaver may have the widest range of options available for its additional rear buttons. Users can choose the number of additional buttons and whether they are pre-programmed or re-programmable. They can also determine button locations, their texture, and whether buttons are clickable or silent.

There are also plenty of material options for the controller, including soft-touch, hydro dips, and translucent options. Other Battle Beaver PS5 controller options include KontrolFreak grips, smart trigger implementation, and thumbstick tension adjustments.

Prices for a user-customized controller start at $82. However, Battle Beaver doesn’t expect to ship custom controllers until early 2022. Also, pre-made PS5 controllers are sold out on the site, so users should customize one themselves first.

Other high-end features of the Revolution Unlimited Pro include removable weights that can fit into the bottom of the controller and wider shafts for sticks that adjust actuation points. It also has an LED ring around the right stick and buttons on the back of the controller that adjust the volume of a connected headset.

Although it works with PS4 games on the PS5, the Nacon Unlimited will not work with PS5 games. The lack of DualShock 4 support for PS5 games is a decision by Sony. Games on PS5 use the adaptive triggers and haptic feedback of DualSense, which are not present on the DualShock 4.

2021-11-19
Previous Post: Global law enforcement agencies are already using the new method
Next Post: Vax-2-School drawings from Ohio are scheduled for today; winners to be announced next week – WHIO TV 7 and WHIO Radio