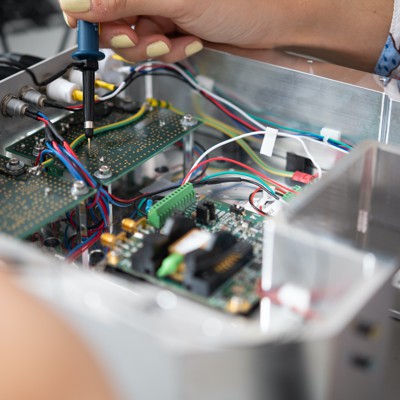 Much ink has been spilled on quantum computers, especially in the exaggerated claims that quantum cryptanalysis will one day destroy today’s encryption techniques. But their simpler cousins, quantum sensors, are here now and improving at a rate that demands urgent attention.

Quantum sensors use the smallest amounts of energy and matter to detect and measure tiny changes in time, gravity, temperature, pressure, rotation, acceleration, frequency, and magnetic and electric fields. They have been commercially available in various forms for over half a century; think of a magnetic resonance imaging machine, or MRI, that tracks the magnetic spin flips of individual hydrogen atoms to peer into a body. But recent advances in the field suggest these sensors will soon bring a revolution in signal measurement and intelligence, perhaps making it easier to detect submarines, spacecraft and underground facilities.

Strategists need to understand the new capabilities that quantum sensing will provide and start planning countermeasures today. Here are three examples that help explain why.

Ultra-precise timing is the most important quantum sensing achievement to date, as it adds precision to all other forms of sensing. For example, it allows us to make repeated observations and combine them, an approach sometimes called “super resolution.” Think of how today’s photographers take four or eight photos of the same scene and then combine the images using software. Better timing allows the same kind of thing with all kinds of measurements.

The 1970s atomic clocks that underpinned the Global Positioning System and the revolution that accompanied it, as well as miniaturized atomic clocks, became commercially available. Microsemi Corporation, for example, sells a 35-gram “space chip scale atomic clock”. The labs are working on even better sync technology that promises to be just as transformative. In 2018, NIST announced a breakthrough: a clock based on an array of ytterbium atoms so sensitive it wouldn’t drift more than a second in 10 billion years.

In addition to making ultra-precise GPS, quantum sensors can measure the shape and gravitational field of the Earth down to centimeters. Such detection can be useful both for mapping underground mineral resources and for accurately calculating the trajectories of ballistic missiles and other munitions.

The military has long searched for ways to obtain highly accurate location data without using easily jammed GPS-like signals. Quantum positioning sensors track minute changes in rotation and acceleration, using Newton’s laws (adjusted for relativity) to accurately infer changes in location over time. Because they don’t depend on signals from satellites or ground stations, they work anywhere – indoors, underground or underwater – and are resistant to jamming. Defense contractors are beginning to manufacture portable QPS packages that can fit inside weapons.

See through walls and water

Advances in quantum radar and sonar research have shaken some policymakers because they can allow enemies to detect stealth warplanes and warships and distinguish legitimate radar targets from decoys.

Quantum radar would work by generating billions of “entangled” photon pairs, sending one photon of each pair into the search area while keeping the other in memory. The “signal” photons reflected back to the sensor are then compared to their “idle” companions, revealing information about objects suspended in the air. Unlike conventional radars, these sensors promise to be largely immune to jamming and even detection by an adversary. In space, where photons are less likely to scatter, quantum radar could be used to detect ballistic missiles, uncover adversaries’ secret satellites, and spot and track tiny but still dangerous space junk. There are engineering challenges, but theorists believe they are surmountable, and recent developments suggest approaches that could yield practical results.

The threat of quantum sensing to the status quo is most severe underwater. The Chinese military has reportedly developed next-generation sonar-like systems capable of detecting submarines and even underground objects. Other publications describe how Chinese scientists used precise time and location measurements to fly a magnetometer over a field and detect buried iron balls based on their disturbances of the Earth’s magnetic field.

Such devices should eventually be able to detect the existence of tunnels or underground works, and even the movement of military equipment or drugs through such tunnels. They could also enable the detection and tracking of hitherto almost undetectable US ballistic missile submarines, and thus destabilize nuclear deterrence.

The importance of quantum sensors has largely eluded policymakers, even though the technology has been improving for decades. Part of the reason is surely the hype surrounding quantum computers, whose challenges to practicability include their need to be protected from interaction with the rest of the universe until its computation is complete. But quantum sensors, which exploit this extreme sensitivity, are here today and improving rapidly.

The coming decades will be marked by a greater reliance on measurement and sensing intelligence, brought about by electromagnetic and gravimetric quantum sensors that can see through barriers. The military may soon find it impossible to conceal material, and current secrecy strategies, such as the use of underground facilities, may be rendered ineffective.

Security decision makers need to keep an eye on advances in quantum sensing and their implications. And they have to wonder what that will mean when this technology moves out of intelligence and military agencies and into the reach of law enforcement, private businesses and wealthy individuals.

Chris Jay Hoofnagle is Professor of Law in Residence at the University of California, Berkeley School of Law. Simson Garfinkel is a senior data scientist at the US Department of Homeland Security, a part-time professor at George Washington University, and a member of the US Committee on Technology and Policy for the Association for Computing Machinery. They are co-authors of Law and Policy for the Quantum Age (Cambridge University Press, 2022). The views presented in this article do not reflect the policy of the Department of Homeland Security or the United States government.