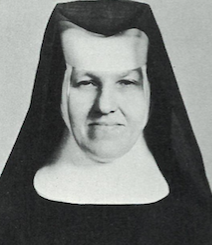 Our Rich History: From Mathematics to Computing – Before the 21st Century Villa Madonna/Thomas More College

The mathematics department was contained in the sciences until 1929. Sister M. Domitilla Thuener, OSB served as the first chair of the combined departments (1921–1929), then chair of the separate math department (1929–1943). She was later followed by Sister Mary Elizabeth Frisch, who was president at the time of Dr. Hanna’s dissertation in 1961. At that time, the department’s faculty included James Brooks, Sr. Mary Hulitta Ege, OSB, Sister Mary Rose Rauen, OSB, William Bettenhorn, and Lawrence Mammering, with others added in 1961, namely Robert L. Becker, John McAnow, and Harvey Weitkamp (Hanna’s thesis, p. 248).

It was noted, as a sign of things to come, that “up to the June 1961 graduation, 61 mathematics majors had graduated from the college; with 36 currently concentrating on mathematics as of the spring of 1961. Eighteen graduates of the department have gone on to graduate studies, and of these six have obtained their master’s degrees, one a doctorate, and four are currently (1961) in the school of graduate studies” (Hanna’s thesis). The thesis went on to describe the main offerings, adding that all students in the physics and chemistry majors must take math courses each year.

Sister Mary Elizabeth’s conclusion was that: “During the 1960s and 1961, in addition to revising its curriculum, the Mathematics Department strengthened its course offerings and raised the level of performance expected of students in order to meet to the requirements of graduate schools of science that incoming students be better prepared in the field of mathematics” (Hanna’s memoir, p. 249). Obviously, Villa Madonna College’s continued respectability as a liberal arts institution could rely on the strength of the Mathematics Department, guaranteed by the founding order of the Benedictine Sisters and its mathematicians, Sister M. Domitilla Thuener, OSB, Sister Mary Elizabeth Frisch, OSB, and Sister M. Rose Rauen, OSB

Soon after, two laymen played an important role in what was to be the direction of the mathematics department for the next few decades: Dr. Steven H. Lameier and Mr. Kenneth Taylor (who would become one of the long-time professors college computer science program dates back to the 1970s). Dr. Lameier was hired as a full-time faculty member in 1969 while completing his doctorate at the University of Cincinnati (1973). He started as an instructor (1969-1972); then assistant professor (1972-1978); Associate Professor (1978-1982+) and served as President for many years, beginning in 1982.

Dr. Lameier’s research was “Computer Applications, Probability and Statistics, Numerical Analysis, Approximation Theory, Univalent Function Theory, Number Theory, and Real and Complex Analysis” (Steven H. Lameier, Curriculum Vita, March 26, 1968, TMU archive). Dr. Lameier had worked for consulting firms. In addition, he had received teaching grants, NASA internships, and NSF/Phi Beta Kappa fellowships. Consistently, year after year, Lameier has received positive teaching evaluations. He was a major pillar of the department’s success for the rest of the 20th century (mainly as chairman) and into the early 21st century. Other members of the mathematics faculty during these years include Thomas Vanden Eynden, Debbie Calloway and Jack Wells (who also taught physics and is still at Thomas More College in the 2020s).

Steve Lameier’s most influential counterpart was Kenneth Taylor, who also served Villa Madonna/Thomas More College for several decades, first in mathematics and later in computer science. Like Dr. Lameier, Ken also started in the 1960s (1966), rising to the rank of associate professor. 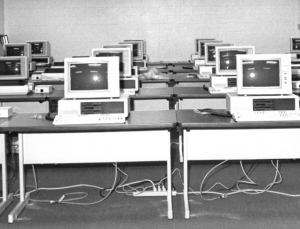 Ken Taylor’s background was varied, making him an ideal candidate for a liberal arts institution like VMC/TMC. He started at Villa Madonna shortly after completing both a Masters in Mathematics Education at Xavier University (1964) and a Masters in Mathematics from Ohio State in 1966, continuing there for years in as an “Anything But Thesis” candidate in mathematics before changing direction. the new emerging field of computing. In preparation, he completed the required graduate credit hours at a combination of the University of Central Oklahoma and James Madison University. For the rest of his career at Thomas More College, until his retirement in 2011, Ken Taylor was the backbone of the college’s computer science program.

It seems to be divine providence that the arrival of professors like Professor Lameier and Taylor coincides with the college’s move to the Crestview Hills campus. On July 8, 1968, John L. Krebs, the College’s first computer center director, submitted a proposal for what would be the college’s first computer. In the words of the proposal, “in order to maintain its stature as a first-class institution, Thomas More College must upgrade faculty in the use and application of computer technology in its curriculum ( and) our currently enrolled students with the use and application of computers regardless of their field of endeavour” (“Proposal for a Computer Facility at Thomas More College, July 9, 1968, p. 2, TMU Archives). It was definitely a prophecy that would set the stage for what was to follow. 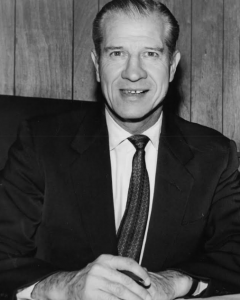 It was only a few months later (August 28, 1968) that a proposal to support the acquisition of a computer installation for the college was submitted. The grant that followed was $57,400 (President John Murphy’s Press Release, October 8, 1968, TMU Archives). It was noted that the first professor hired for the center would be Robert John Graham, as a part-time instructor and part-time programmer. The press advisory continued that “NSF grant exceeds any other for an institution the size of Thomas More College” (press release). TMC had entered the computer world. The new Director of the Computer Center would be Margaret Geis.

The installation of a Connect/Campus management system followed, along with the creation of an academic major and a computer science department. Early leaders in the development of the program included James McDevitt, Charles Bender and eventually Dr. Carl Evert, all encouraged by Academic Dean Dr. James Ebben and Dean of Faculty Dr. Ron Mann. Dr. Evert will become co-author in 1979 of What Every Engineer Should Know About Microcomputers: Hardware/Software Designwhile on the faculty of Thomas More.

The administration strongly encouraged interactions with other departments for faculty and computer science students, as well as the inclusion of at least one cooperative education (co-op) experience. Thomas More was helped by Dr. Evert’s experience at the University of Cincinnati, where he had taught for decades and was a professor emeritus in the Department of Electrical and Computer Engineering. UC had been one of the leading cooperative institutions in the United States. In 1978, President Robert Giroux appointed Dr. Evert “Special Advisor to the President for Computer Affairs” (Letter from President Robert Giroux to Dean of Faculty Dr. Ron Mann, to whom Dr. Evert had previously reported, August 7, 1978 , TMU Archives).

Dr. Carl Evert, Faculty Member of the Department of Computer Science. He was eventually chosen by President Robert Giroux to be the President’s Special Advisor for Computer Affairs. (TMU Archive)

In a letter from Dr. Carl Evert to Thomas More College (September 10, 1977), he suggested that “the goal of the Computer Science Department at Thomas More is to develop an educational program within the context of the liberal arts environment that will equip students with employable skills and a comprehensive appreciation of the cultural implications of computer technology in a modern society” (Dr. Carl F. Evert Proposal for the “Development of a Computer Science Program at Thomas More College,” September 10, 1977 , TMU Archives).

Over the next few decades, Dr. Evert’s dream would come to fruition as his concept guided many talented faculty and staff in the Computing Center and Department of Computer Science throughout the 20th century. Full-time faculty included Thomas Hext and Dorene Stall, and pioneer staff members were Teresa Blum, Jay Blum, Chris Heist, and Bill Swisher. Dave Manning preceded Professors Hext and Stall. Two professors from related fields with expertise and involvement were Dr. Bill Porter (Psychology) and Dr. Jim Swartz (Chemistry). 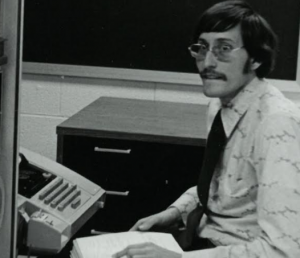 As previously noted, our longtime mathematician, Ken Taylor, with his university background in computer science, was a stabilizing figure in both departments, serving as Director of Mathematics from 1970 to 1981 and Director of Computer Science from 1981 to 1988. In those years before 2000, TMC joined the Catholic College Computer Consortium, held summer computer camps, encouraged proposals to improve the use of microcomputers, created a popular newsletter called “Nibble News” and does everything possible to bring the Thomas More community to the online world.

Dr. Raymond G. Hebert is Professor of History and Executive Director of the William T. Robinson III Institute for Religious Liberty at Thomas More University. He has just completed his 46th year at Thomas More and, with this training, will now serve as editor of the official history of Thomas More College/University from 1971 to 2021. With a projected title of RETROSPECT AND VISTA II, he will serve as sequel to Sr. Irmina Saelinger’s RETROSPECT AND VISTA, the story of the first 50 years of Thomas More College (formerly Villa Madonna College). He can be contacted at
[email protected]

We want to learn about the history of your business, church, school, or organization in our area (Cincinnati, Northern Kentucky, and along the Ohio River). If you would like to share your rich history with others, please contact Our Rich History editor Paul A. Tenkotte at [email protected] Paul A. Tenkotte, PhD is Professor of History and Gender Studies at Northern Kentucky University (NKU) and author of numerous books and articles. 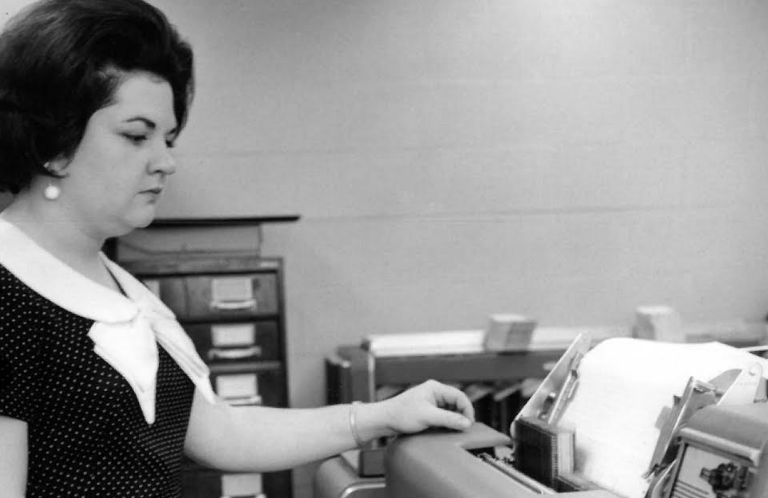