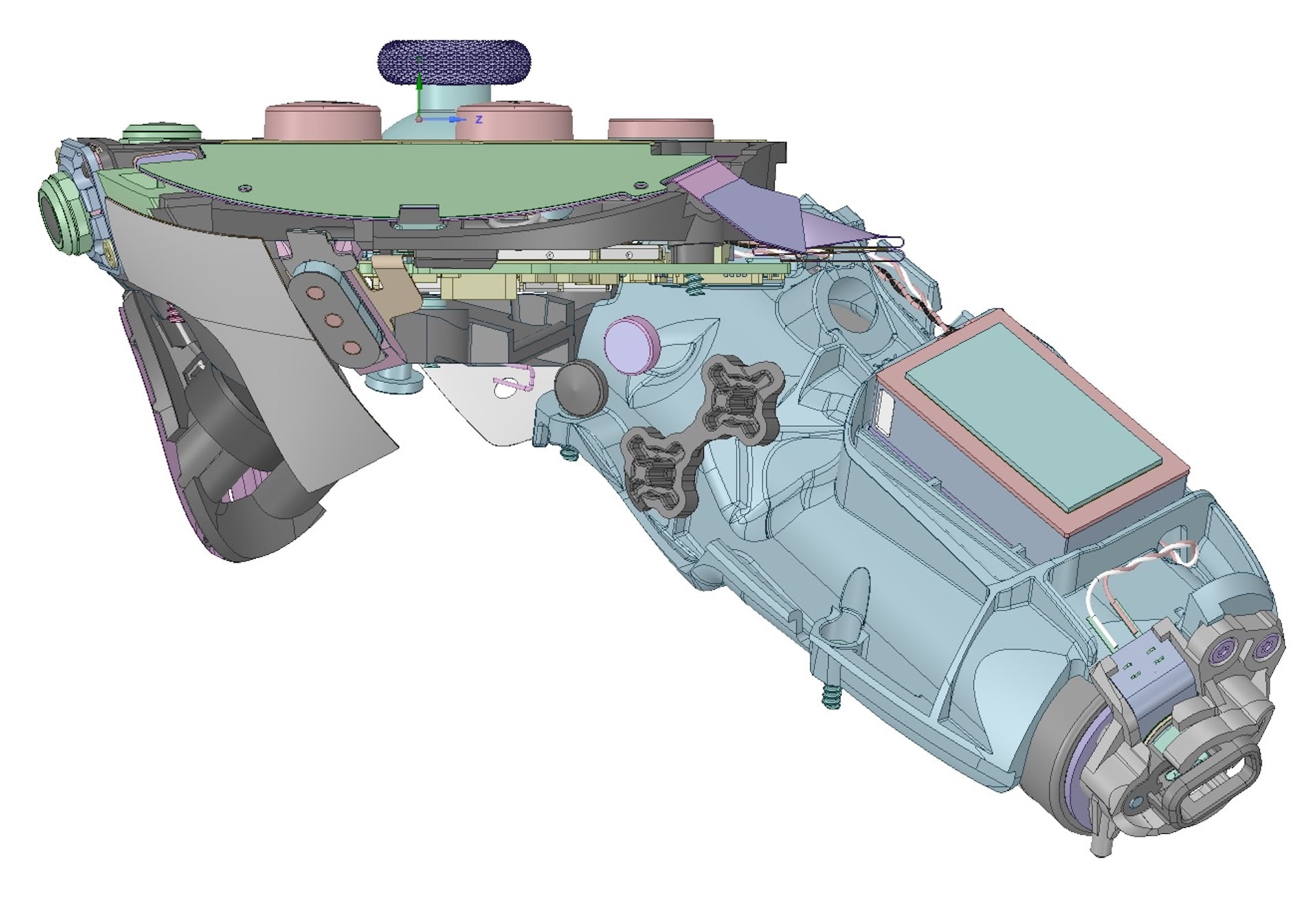 Cambria appears with brand new VR controllers. Until now, little was known about them. A leak reveals new details.

We already knew VR controllers track themselves via integrated cameras. This has several advantages. On the one hand, bulky tracking rings become superfluous, which means controllers take up less space and no longer bother. For another, tracking volume becomes larger. If you place the controllers behind your back, tracking should no longer fail. That’s the theory, anyway.

According to an older video leak, the headset and controllers are charged via included docking station. The battery will be permanently installed, unlike the Quest 2 controllers, where the battery can be replaced.

In a later report, Lynch explained why his sources were wrong and leaked plans and other technical details for the controllers. As always with leaks, information should be taken with a grain of salt. “Inside information” may be inaccurate, outdated or simply wrong.

According to Lynch, Meta planned to sell the controllers and dock separately, either at launch or at a later date. One of the ulterior motives was to lower Cambria’s entry price, especially considering that hand tracking is improving. As for shipping headsets without controllers, Meta plays with such thinking consistently. 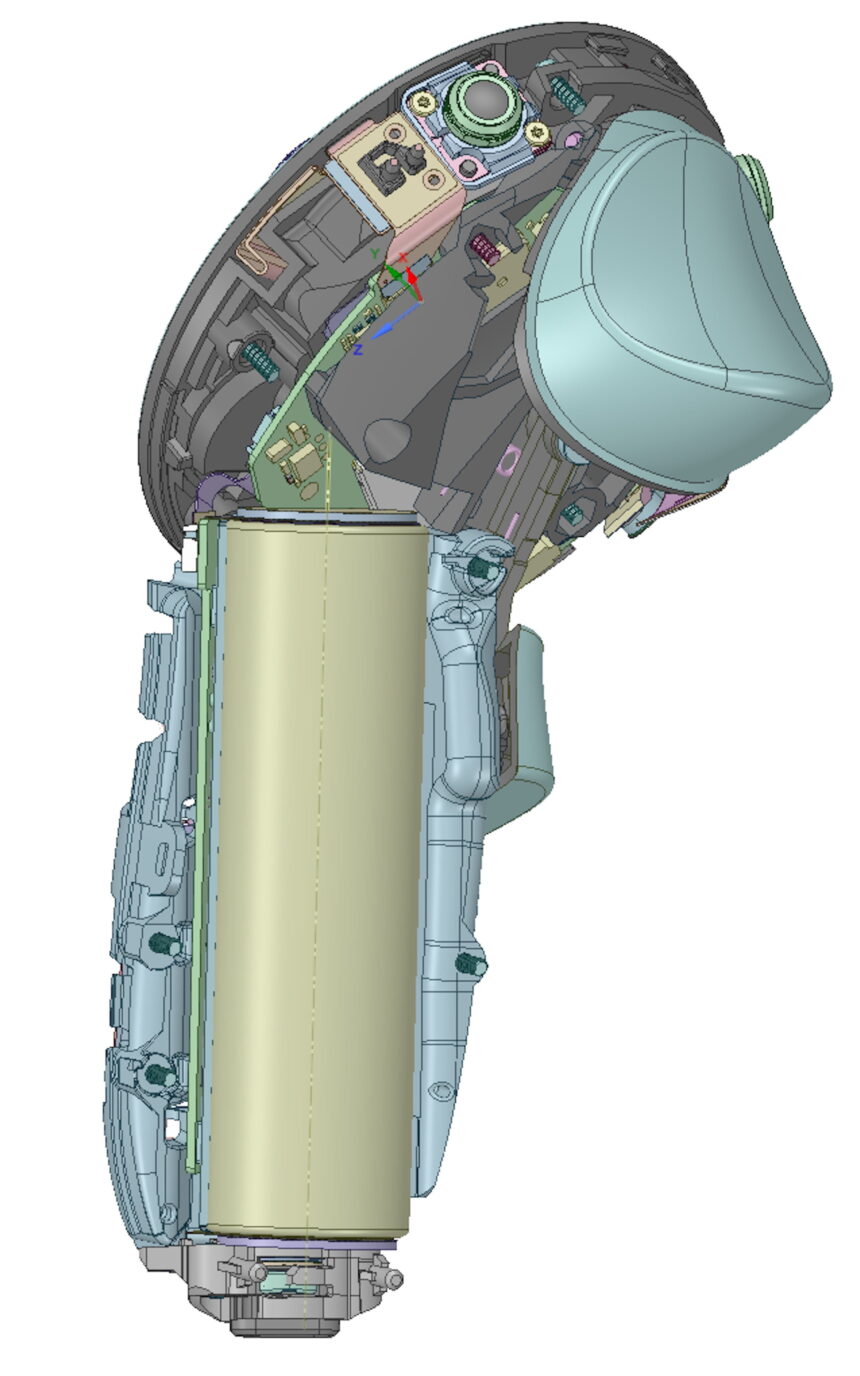 Good to see in this photo: An IR tracking camera and the battery. | Image: Brad Lynch/Meta

The biggest slowdown, however, is due to an alleged support planned for Quest 2 , Lynch sources say. Meta is reportedly working hard to make the much-improved new controllers compatible with Meta Quest 2. Meta has fixed some tough issues, but not others yet, they say.

Sources do not confirm that the controllers and docking station will indeed be sold separately and will work with Meta Quest 2. If Meta decides to do so, the price would be $300.

At the beginning of June, Lynch revealed the construction plans for the Cambria helmet. Now the Starlet controller plans follow.

According to Lynch, the devices each have three infrared cameras for autonomous room tracking, a Qualcomm SoC, and a 3,200 mAh capacity battery installed. One of the drawings shows the contacts needed for charging.

According to Lynch, controllers offer particularly high-quality haptics. A special actuator is installed under each of the trigger buttons, thumb rest and grip – for responsive vibration, pinch feedback and high quality vibration haptics (in that order).

Another new feature discovered by Lynch is a pressure sensor at the end of the handlewhich should allow for more realistic or accurate drawing on a solid surface.

Of course. Meta markets Cambria as a pair of work glasses, with Horizon Workrooms as its central application. In virtual meetings, you can draw on whiteboards and blackboards by holding the Quest 2 controller upside down and drawing with the tip of the handle. A pressure sensor could improve this functionality.

Lynch claims to have heard that the handle could support special attachments, such as pen nibs. This feature could allow third-party manufacturers to develop special accessories for the controllers.

The most important specs and facts about Starlet controllers mentioned by Lynch are below:

Note: Links to online stores in articles may be so-called affiliate links. If you buy through this link, MIXED receives a commission from the supplier. For you, the price does not change.