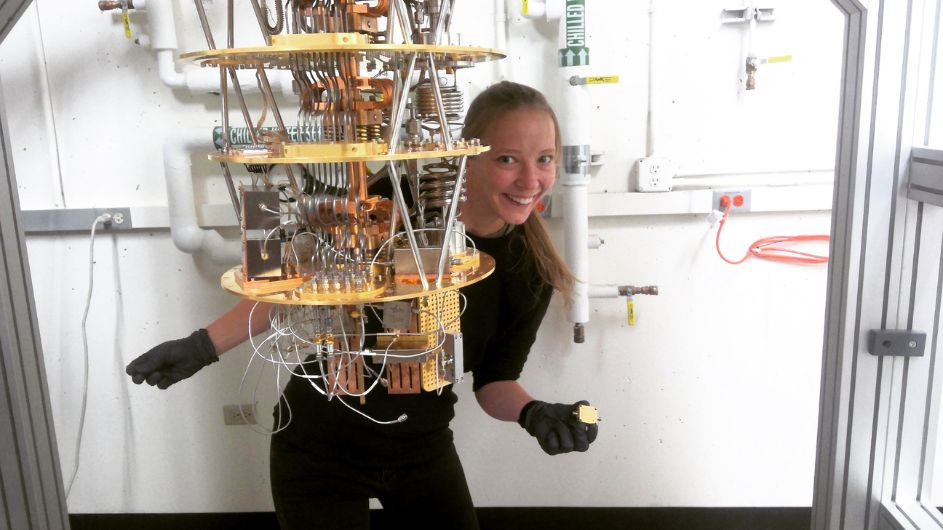 For her internship, Doroshevich spent 10 weeks in Corey Rae McRae’s lab at the University of Colorado at Boulder, working with dilution refrigerators, which are critical cryogenic equipment for testing quantum computer components.

“Lana has been an active, productive and knowledgeable collaborator in my lab this summer. His enthusiasm for superconducting quantum device research was evident throughout his time at CU Boulder – from helping to install hundreds of pounds of dilution refrigerator equipment to assembling micro-chip packaging. -waves for microscale quantum devices, and even performing radio frequency measurements of these cryogenically cooled devices and analyzing the data for our collaborators at Northwestern University, Rigetti Computing and Fermilab,” said said McRae. “Lana has a long and successful career ahead of her as a researcher in her chosen discipline. We hope to work with her again!”

As Doroshevich prepares for the fall semester, she shared her enthusiasm for quantum science and what she learned in Colorado.

Q. Before coming to Colorado, how did you come to Columbia?

I am originally from St. Petersburg, Russia, where I studied to become a manager of a large machinery factory. I don’t know what my 17 year old self was thinking!

I moved to the States a few years ago and did a few odd jobs: I was a waitress, hostess, dog walker on the Lower East Side. But I’ve always been interested in math and read a lot of physics books. I decided that I wanted to make physics my profession rather than my passion.

I enrolled in Bergen Community College, which has a great STEM program, and then transferred to the School of General Studies two years ago.

Q. How was the transition?

It ended up being the best decision, but at the time I was really unsure of myself. I felt like all my classmates were so far ahead of me, and first year was tough, especially since everything was on Zoom.

But I found a very strong support system and now I feel like I belong. My husband, whom I met in Brooklyn and who pushed me to make the first jump to school, never lets me doubt myself. I also had professors at Columbia who really inspired me, especially professors Marka Szabolcs, Sebastian Will and William Zajc, who all happen to be involved in quantum research.

Q. What makes quantum so interesting to you?

Physicist Richard Feynman said it best: “Nature isn’t classical, damn it, and if you want to do a simulation of nature, you better do quantum mechanics.” It resonated. Classical physics is full of approximations, which is great, but I’m excited about the idea that something like a quantum computer could one day help us fully understand nature.

Q. And that brought you to Colorado?

In fact, I applied to every quantum internship I could find on Google, but the SQMS program was my first choice!

Q. How was the experience?

It was the most amazing 10 weeks of my life. I arrived early, while Dr. McRae was moving his lab space. I was able to help rebuild all the equipment and learn machines and techniques that you don’t really find in textbooks, but are key parts of a research lab.

This included helping to set up the dilution fridge, which is fascinating. It’s a roughly $600,000 piece of equipment that cools superconducting quantum bits (qubits), which are the computing components of quantum computers, down to a few milliKelvin.

Q. Why do researchers need these expensive refrigerators?

Qubits are error prone. Environmental noise and interference from the materials quantum computers are constructed from can cause qubits to unintentionally lose the quantum properties that give them their computational advantage over the traditional binary units, or bits, of classical computers.

Understanding unexpected qubit errors is a problem that quantum researchers are currently facing. By minimizing the effects of temperature using a dilution refrigerator, all you have to do is consider quantum mechanics.