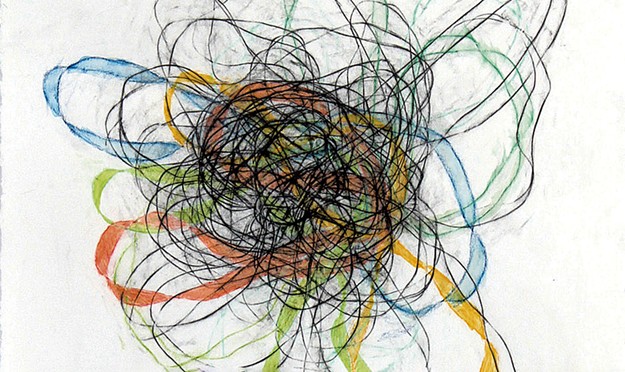 At Vermont Supreme Court Gallery last week, artist from Montpellier Alisa Dworsky opined: “A work of art is not an emphatic certainty.” She was speaking at the July 6 opening of her exhibition of abstract drawings called “The Folded Line”.

Dworsky’s work is about process – an evolving, experimental and uncertain field. The 15 works on paper in the exhibition – seven from his “Entangle” series and eight from a related series called “Fold” – are unmistakably finished and framed. Yet they all embody traces of the artistic process, both individually and as sets of iterations.

This process, in both series, involved creating designs of frottage—that is, rubbing—of lengths of ribbon that Dworsky laid out under paper. In the “Entangle” works, she used wire-edged ribbon loops, some placed in dense tangles, and rubbed them in various ways with graphite or watercolor pencil, filling in selected ribbons with color. The series centers its tangles on 30 x 22 inch paper, leaving a wide margin of white.

For the more linear “Fold” series, on 50-by-38-inch paper, Dworsky used a single length of grosgrain ribbon folded at varying angles. She rubbed it with graphite or thick colored pencil sticks, moved the position of the tape under the paper slightly, and rubbed again. The resulting angular shapes fill the paper like rocky landscapes or tall buildings. 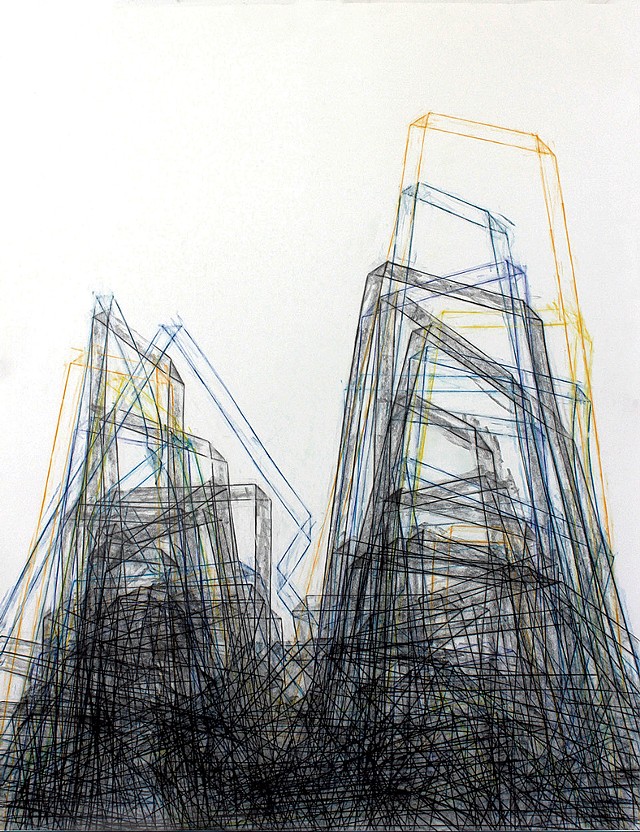 Then she edited the works of the two series by erasing. These erasures are barely visible in the individual works, but as Dworsky erased less and less as each series continued, the comparisons are telling. Later works in both series, which are numbered, show more graphite. (The “Entangle” works include two early versions from 2016; the others are from 2022. The “Fold” works are from 2018-2022.)

Case in point: a furiously dense black scribble dominates “Entangle 43”, the last of this series to be shown. The color only appears in partially obscured previews of yellow, green, and blue ribbons. “Fold 14”, its counterpart in the other series, suggests two skyscrapers emerging from the rubble. Their bases are made of hatch-like rubbing so thick that they almost completely clog the white paper.

These contrast with previous iterations, such as the “Fold 2”, “Fold 4”, and “Fold 3” trio, in which much of the bottom layer is erased to show even ribbon rubs from top to bottom. .

In a phone call, Dworsky revealed that current events shaped her approach as she worked on each series’ iterations.

“Much was – is – happens in the world which is emotional and intense,” the artist said. This led to “a desire not to make them look pretty. There is beauty in the color, but I wanted to counter that with a fierce, layered line that obscured the beauty. [I wanted] tension between the lyricism of the colored form and the ferocity of the black and white forms.”

The exhibition “The Folded Line” as a whole merges the many mediums in which the artist works. Dworsky studied painting and printmaking as an undergraduate in fine arts at Stanford University, then earned a master’s degree in architecture at Yale University. She currently teaches architectural design at Norwich University while maintaining an extensive installation art practice.

Dworsky traces his “Entangle” and “Fold” series to his exploration of crocheted rope pieces, installed as three-dimensional cones and other sculptural shapes, nearly two decades ago. The shapes inspired her to make graphite rubbings of the hanging rope, which became her “Yellow Poly Rope” series. Eventually, she switched to tape for installs and rubs. 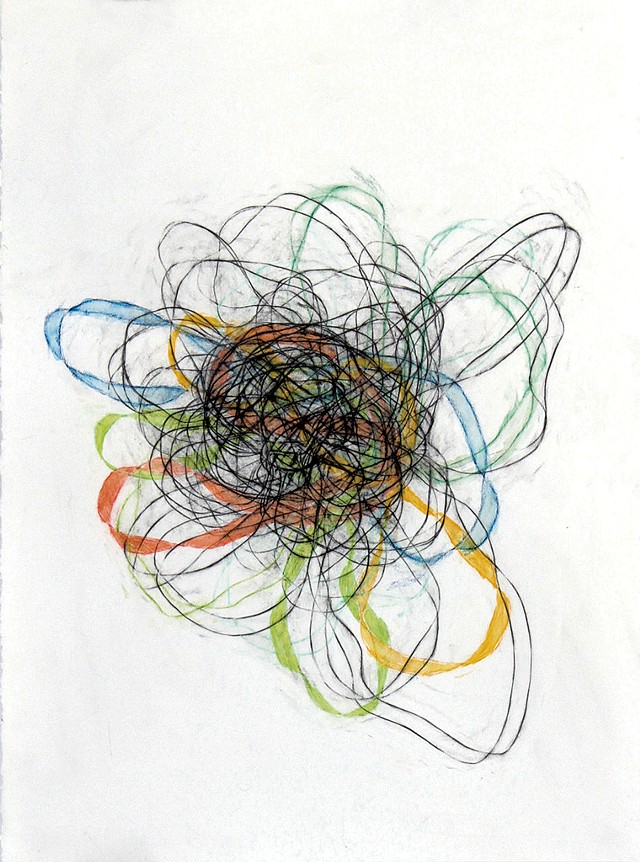 The Supreme Court exhibition embodies elements of all of its artistic mediums: the three-dimensionality of the installations – the ribbon is, after all, 3D; variations in applied pressure so critical for etching; and the use of color, which is at the heart of painting.

“You can find information in all disciplines,” Dworsky commented during the opening.

She did so specifically in “Job Site,” a collaborative installation with Bill Ferehawk at the BCA Center in Burlington in 2019. Drawing directly from her background in architectural design-build, this exhibition highlighted the construction art and featured a framed, partially sheathed wall titled “Time and Motion”. Two videos projected onto it showed a snapping chalk line and a swaying plumb line, a reminder that construction is a process that involves the making of ephemeral marks and happens over time.

Likewise, Dworsky’s “Entangle” and “Fold” series explore the process; they are a record over time of change and movement. Taken together, they ultimately record an artist’s meticulous search for the outer limits of a material’s possibilities.