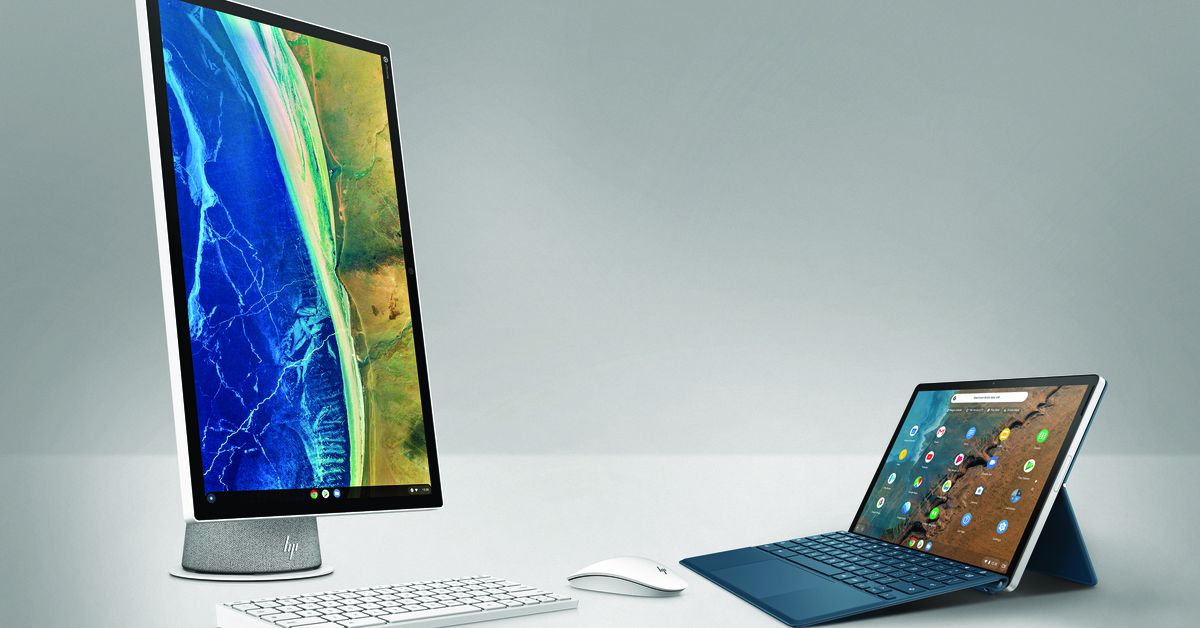 HP announces two new Chrome OS PCs for its consumer-focused lineup. The first is the Chromebase AiO, an all-in-one desktop computer with a screen that can swivel from landscape to portrait. The second is the Chromebook x2 11, a lightweight detachable that can easily switch from laptop to tablet mode. The company is also announcing a new Works With Chromebook-certified 24-inch USB-C monitor.

The $600+ Chromebase AiO is an all-in-one computer with a rotating screen — a first for all-in-one Chrome OS desktops. Its 21.5-inch touchscreen has a resolution of 1920 x 1080 pixels and it comes with an Intel Pentium Gold processor or a 10th generation Core i3 chip. The base configuration of the Pentium Gold has 4 GB of RAM and 64 GB of eMMC storage; you’ll be able to get up to 16GB of RAM and a 256GB SSD with an upgraded model, but oddly there’s no 8GB of RAM configuration available.

The tapered base of the Chromebase AiO is made of aluminum and houses two 5-watt speakers and four ports – two USB-C and two USB-A – as well as a 3.5mm headphone jack. A 5 megapixel camera is available for video calls. You can selectively mute the camera or microphones with the Chromebase’s built-in shutter. The box includes a wireless mouse and keyboard.

Along with its ability to swivel from landscape to portrait, the screen can be tilted 20 degrees, although there’s no height adjustment. HP says portrait mode makes it easier to read long web pages or work with documents. I had the chance to test out a pre-production version of the Chromebase AiO to see how useful the rotating screen is in person – you can read my impressions here.

The Chromebook x2 11 is an 11-inch Chrome OS tablet that comes with a magnetic keyboard and a kickstand for using it in laptop mode. It has Qualcomm’s Snapdragon 7c processor (the first-gen chip, not the more recently announced second-gen version) and optional 4G LTE connectivity (but no 5G). HP claims it will last up to 11 hours between charges.

The 11-inch touchscreen features a 3:2 aspect ratio and 2160 x 1440 resolution. The tablet itself is made of aluminum and has two USB-C ports for charging and data transfer and a microSD card reader. A fingerprint reader is integrated into the power button for biometric logins, while two speakers provide audio. Unfortunately, HP couldn’t find room for a 3.5mm headphone jack.

Included in the box is a wireless stylus that magnetically attaches to the side of the x2 11 for charging. It can be used with Google’s new Cursive progressive web app for note taking and sketching. The x2 11 will be the first device to market with the Cursive app; Google says it will be made available to other Chrome OS devices in the future.

The M24fd is a USB-C monitor that has Google’s Works With Chromebook certification for easy setup with a Chrome OS laptop. It can supply up to 65 watts of power to the laptop connected via the USB-C cable, or you can connect it to other devices via HDMI (1.4) or VGA. There are also two USB-A ports on the monitor for other peripherals.

The 23.8-inch screen is IPS and has a resolution of 1920 x 1080 pixels. HP says it has 178-degree horizontal and vertical viewing angles and supports AMD’s FreeSync technology for smoother gameplay, with refresh rates up to 75Hz. Brightness is rated up to 300 nits and there’s an anti-reflective coating on the screen itself. HP claims up to 99% coverage of the sRGB color space.

The M24fd’s detachable stand doesn’t rotate like the Chromebase AiO, but it does allow tilt adjustment from minus 5 to over 25 degrees. However, there is no height adjustment.