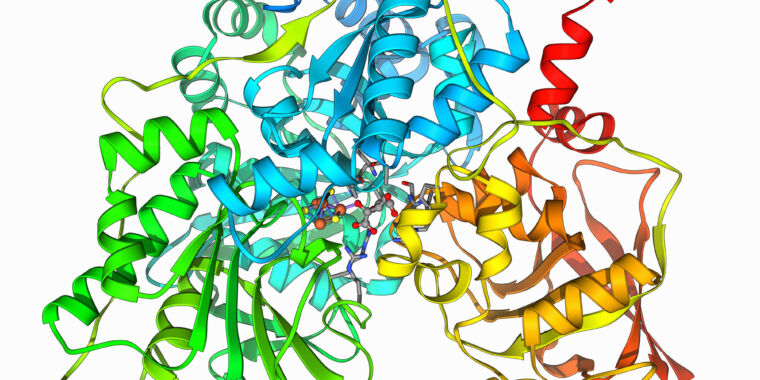 Got a protein you want to inhibit? New software can design a blocker

Thanks in part to the wide range of shapes they can take, and the chemical environments these shapes create, proteins can perform an incredible number of functions. But there are many proteins we wish weren’t working as well, like the proteins on the surface of viruses that let them latch on to new cells, or the damaged proteins that cause cancer cells to grow out of control.

Ideally, we would like to block key sites of these proteins, thereby limiting their ability to do harm. We have seen progress in this area with the introduction of a number of small molecule drugs, including one that appears to be effective against COVID-19. But this type of drug development often results in chemicals that, for one reason or another, don’t make effective drugs.

Now, researchers have announced that they’ve created software that can engineer a distinct protein that will stick to a target protein and potentially block its activity. The software has been carefully designed to minimize the processing requirements of a complex computational process, and the whole benefits from our ability to perform large-scale validation tests using molecular biology.

How do you calculate this?

Proteins are a chain of amino acids, the cell using 20 different amino acids which have distinct chemical properties. Interactions between these amino acids allow proteins to adopt a three-dimensional configuration, often bringing key amino acids together in one place to form an “active site” that is essential for protein function. Many drugs are designed to fit into this active site, which can stop a protein from working.

An alternative is to cover the site with something large that sticks to it. And one of the easiest things to get to stick with protein is another protein. This approach has certain limitations in drug development. But the biggest problem is designing a protein that specifically sticks to another. Since each link in the chain of a protein can be occupied by one of 20 different amino acids, the number of possible proteins increases enormously after the chain has only a few links. So exploring all possible interacting proteins is completely unsolvable as a calculation.

The new work, which was carried out by a large US-based collaboration, focused on reducing computational complexity. For the new process, the researchers decided to focus on producing many weak interactions rather than specifically designing a few strong interactions. So the process began by taking each of the 20 individual amino acids and testing the strength of its interactions at billions of different sites on the surface of the target protein. The details of these interactions were then stored for later use.

Separately, the researchers built a database of about 35,000 short proteins (about 50 to 65 amino acids long) that formed a stable core. These proteins were then placed next to the target protein. The algorithm would then determine where each amino acid was near the target, then use the previous result to choose which amino acid would have the strongest interactions there.

This process left a much smaller number of protein interactions that needed to be examined in detail. The researchers used a “packing” algorithm to see how the two proteins fit together, then estimated the strength of their bond.