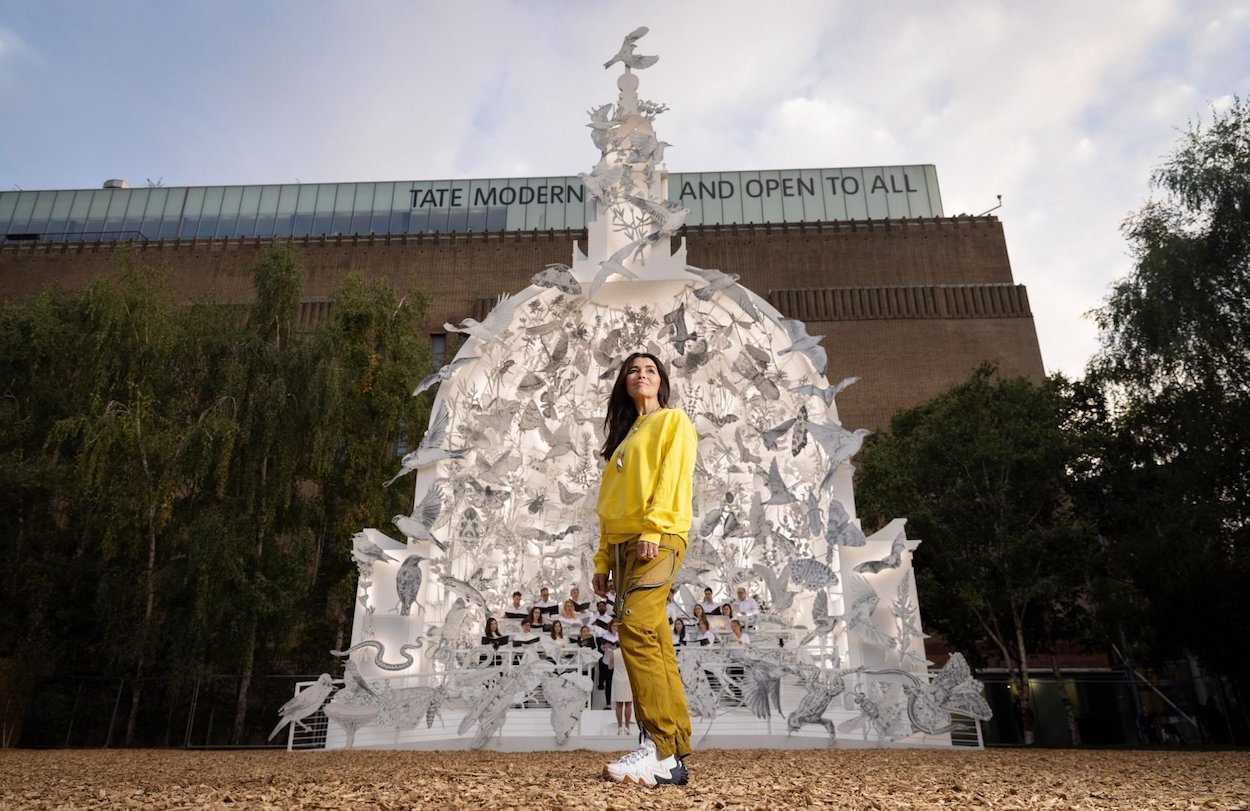 The Design Dispatch offers essential, expert-written news from the design world, curated by our dedicated team. Think of it as your cheat sheet for the day in the design delivered to your inbox before you’ve had your coffee. Subscribe now.

Got something our readers need to see? Submit it here

Es Devlin illuminates the Tate Modern with his luminous drawings of endangered species.

“British designer Es Devlin created Come back home, an illuminated dome illustrated with his own pencil drawings of the 243 species of flora and fauna on London’s conservation priority list. Located outside the Tate Modern gallery in London, the large-scale public installation is a cut-out model of the domed St. Paul’s Cathedral across the River Thames. Devlin created the installation Come Home Again from recycled steel and his own pencil drawings of endangered London species, which were arranged in decorative illuminated clusters. These include birds, beetles and moths as well as fungi, fish and wildflowers, all of which are on London’s conservation priority list identified by the London Biodiversity Action Plan. the city of London. [H/T Dezeen]

A disused giant gas rig sparks interest and anger as an art installation.

“It overlooks the Grand Pier and makes the waterfront ferris wheel look tiny. As it took shape on the beach at Weston-super-Mare, See Monster– a disused North Sea gas platform converted into one of the UK’s largest public art installations – sparked a heady mix of head-scratching, interest and anger. Finally, after delays caused by the extreme climatic hazards of this summer, visitors are invited to board. The installation is the ninth produced as part of the Unboxed: Creativity in the UK series which has drawn widespread criticism and ridicule, not least because of the cost of the project: a whopping $128 million for taxpayers across Britain’s four nations. [H/T The Guardian]

“Coinciding with Cersaie in Bologna, ceramic tile specialist Mutina presents its latest products at its renovated headquarters in Fiorano, Modena. The new Spazio Mutina was designed by Urquiola Studio in collaboration with Mutina Projects Division as a space to accommodate the entire universe of the brand: Mutina Collections, Mutina Interiors, Mutina Editions. Within this robust renovation, the showroom will feature installations celebrating the brand’s relationships with designers such as Ronan and Erwan Bouroullec, Patricia Urquiola, Konstantin Grcic, Tokujin Yoshioka, Raw-Edges, Hella Jongerius and Barber & Osgerby, among others. New to the Mutina range include small tiles by Tokujin Yoshioka, as well as a collection created by Vincent Van Duysen.” [H/T Wallpaper]

The Guggenheim Museum cancels the well-attended biennial of the Hugo Boss Prize.

New York’s Solomon R. Guggenheim Museum Ends Its $100,000 Hugo Boss Prize. The institution gave no reason for the cancellation of the biennial prize, organized with the German luxury fashion company Hugo Boss in 1996 to reward innovation and influence in contemporary art. Modeled after the Turner Prize in Britain but with no restrictions on nationality or age, the prize frequently included a solo exhibition at the museum and had become a mainstay of the international art world, giving emerging and established talent international prestige. [H/T Artforum]

“Construction is underway in Houston on the first multi-story 3D-printed building in the United States. Designed by two assistant professors of architecture at Cornell’s College of Architecture, Art and Planning (AAP), the two-story single-family home fuses 3D-printed concrete with traditional wood framing, creating what designers Leslie Lok and Sasa Zivkovic consider a precedent for future 3D-printed multi-family and mixed-use developments. squares will contain three bedrooms, three bathrooms, and a two-car garage, while a 40-foot-tall chimney will make the home one of the tallest 3D-printed structures in the United States. [H/T Archinect]

“MBH Architects recently completed Miller & Lux, a new upscale steakhouse in San Francisco’s Mission Bay neighborhood. MBH Architects was brought in to serve as Executive Architect with the task of implementing the overall restaurant design concept of Ken Fulk and celebrity chef and operator Tyler Florence. Spread over two floors, the 7,000 square foot waterfront restaurant offers guests the ceremonial experience of visiting a steakhouse. The team framed the restaurant’s interior with brass millwork and dark marble finishes with a caramel and gold color scheme to create a feeling of elegance. [H/T Dexigner]

The Amanita Gallery will open its doors in the former building of the famous club CBGB in the East Village.

“New York City cried when famed rock club CBGB closed its doors in 2006. The legendary home of rock and roll, punk and dance, CBGB was where Johnny Rotten went to face the breakup of the Sex Pistols and where Police and Patti Smith began their careers, often singing for a nearly empty club.When the space was taken over by menswear brand John Varvatos two years later, many New -Yorkers have seen it as emblematic of the endless gentrification of the East Village. But rejoice! The Amanatia Art Gallery will soon open at 313 Bowery in a reimagining that its founders hope will bring the famous venue back to its former glory. The CBGB space originally housed the 313 Gallery art gallery Amanita, who already has a space in Florence, opens the New York space with “Place Holder” featuring works by the Italian painter emerging Leonardo Meoni which will open on September 29. [H/T ARTnews]