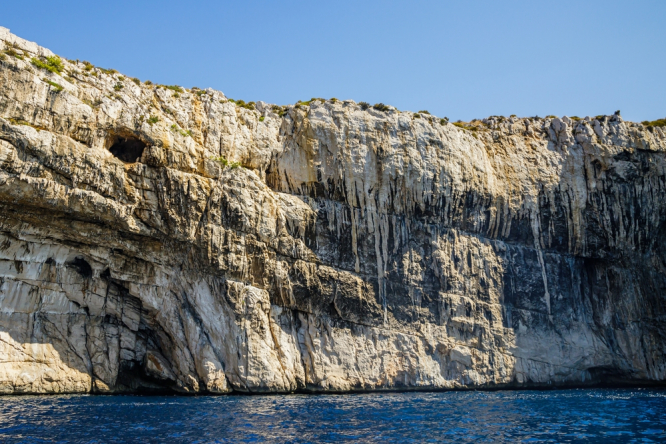 Experts rush to save ancient drawings from the Cosquer underwater cave in southeastern France from the effects of global warming and marine pollution, ahead of the opening of a new virtual exhibit at the complex .

The entrance to the cave is 37 meters underwater in the Calanque de Morgiou, near Marseille.

I raise the ceiling of the hall of chandeliers of the #Cosquer Cave, lying in the water, cursing about the concretions that lacerate my wetsuit like razors. And suddenly, in the viewfinder of the camera, this little horse barely 5 cm long, finely sketched in charcoal. pic.twitter.com/CWTOcwM7lj

Around 30,000 years old, it is known as ‘Underwater Lascaux’ – in reference to the network of Dordogne caves made famous for their hundreds of ancient wall paintings – and contains some of the most important cave drawings in the world. world.

The Lascaux cave is a cave system in the Dordogne (France) where important samples of cave and Paleolithic art have been discovered, dated to 17,000 or 18,600 years ago (Magdalenian period) from after analysis of a reindeer antler rod. pic.twitter.com/MvzCdJ0uuM

Access to the cave is underwater, via a 100 meter long flooded passage into a huge 2,500 m2 cavern, much of which is also underwater.

The walls still above the water display some of the world’s only examples of engravings and drawings from the Upper Paleolithic period, in particular of sea animals, seals and penguins. A total of 229 figures of 13 species are represented.

Stencils of red and black handprints, including those of children, were also recorded, along with several hundred geometric signs and eight male and female sexual designs.

The cave is considered “unique in size in Europe”, said archaeologist Michel Olive, in charge of studying the cave at the regional archeology service the Regional Archeology Service, at News Marseille

Similarly, Luc Vanrell, archaeologist working on the project, said to France 3“The density of graphic representations places Cosquer on the same level as the four largest Paleolithic rock art sites in the world, with Altamira in Spain, Lascaux and Chauvet in France.

“And as it is likely that the walls now underwater were originally also decorated, this makes Cosquer a unique site in Europe.”

It was discovered in 1985 by professional diver and diving school instructor Henri Cosquer, officially reported in 1992 – after three people died trying to find the mysterious cave – and listed as a historical monument the same year.

However, climate change is now threatening the cave, following a sudden 12cm rise in the water level in the cave in 2011.

Mr Olive said: ‘At the time [of the paintings]it was right in the middle of the ice age, the sea level was 135 meters lower and the coast was 10 km further.

French scientists now say they are engaged in a “race against time” against the rise in water and sea pollution (including microplastics), which also threaten the drawings.

Geologist Stephanie Touron, a specialist in rock drawings at the Historical Monuments Research Laboratory in France, said: “The sea, which rises and falls in the cave according to climatic variations, carries away the walls and threatens the ground rich in information. ”

As a result, archaeological divers are stepping up their exploration and virtual recording of the cave, and continuing with 3D digital mapping. So far, more than 600 “graphical entities” have been registered.

One of the divers, Bertrand Chazaly, in charge of digitization operations, said: “Once completed, our virtual Cosquer cave, down to the millimeter, will be an indispensable research tool for conservators and archaeologists who cannot physically access at the site.

Open to the public

2 eras were infected at Cosquer: The Gravettian with the oldest phase of the decoration and the Tardigravettian, a specific Mediterranean episode, well dated and well attested. Pictured is bison 1 dated to the Gravettian.
©KR & @MyRegionSud 3D MC Sources pic.twitter.com/hucoxfOwiL

It comes as Marseille technicians and artists put the finishing touches to a €23million replica of the cave for an exhibition which is due to open to the general public on Saturday June 4.

Provence-Alpes-Côte d’Azur contributed €10 million to the budget, in partnership with the company Klébert Rossillon, of the Villa Méditerranée in town.

Book your tickets for the opening of Cosquer Méditerranée, the replica of the Cosquer cave!
Official opening Saturday June 4
✅ Online ticketing on our site and on site#Cosquer Cave #Cosquer
©️KleberRossilon & Provence-Alpes-Côte d’Azur Region@MyRegionSud pic.twitter.com/6BtGEkPmHl

The cave itself is off-limits even to experienced divers and is only accessible through a locked door for licensed divers working in the state.

The creators of the exhibition used 3D models of the cave collected by a team of archaeologists and also called on the expertise of speleologists who participated in the creation in 2015 of a replica of the nearby Chauvet cave. , in Ardèche.

The artists painstakingly copied the original works from the caves and used as many of the same materials as possible, including charcoal.

The exhibition hopes to attract 500,000 visitors a year.

A 3D replica of 33,000-year-old rock art will be exhibited in Marseille