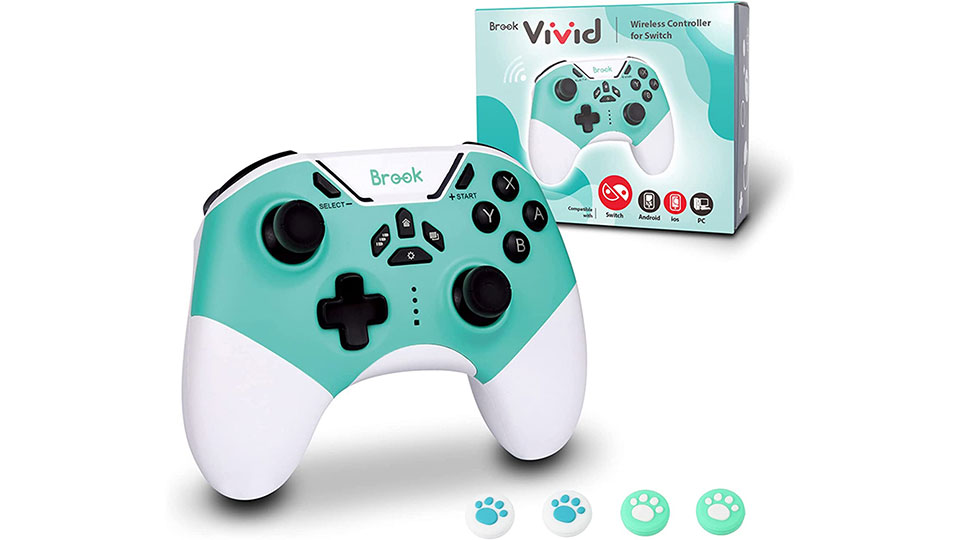 Fresh and charming. Capture the hearts of gamers. Splendid and attractive colors.‧Various functions all in one!

Brook has officially launched a wireless controller for Switch: Vivid. It features multi-functional button design and comfortable ergonomic design integrated with the three main elements: warmth, beauty and vividness. Its charming style and refreshing colors are the highlights of its design. In addition to Switch, it also supports PC and smartphone games. In addition, a smartphone means playing games is exclusively included in the package for free. A single controller with versatile uses makes games more convenient. The Brook Vivid pack with grips is now on the market at a retail price of $40.

Switch has enjoyed extremely high popularity since its launch. In a short time, it ranked among the top three sales of home consoles. However, the only downside is the comfort and operability of the Joy-Con when using it, which is frequently criticized by gamers and even brings negative gaming experiences. Considering the downside, Brook set out to develop controllers to fully support Switch gamers. And yet, this new controller differs from the legitimate image of ordinary video games. It starts from the concept of fun co-play while its style and colors combine with the fun vibe granted by Switch. The color Aqua Blue and Sunshine Yellow is thus selected. Besides male gamers, it is also convenient for female gamers and children. The controller adopts the ergonomic design which provides stability and easy to grip; meanwhile, it greatly improves the comfort level during use. Players no longer have pain after playing with it for a long time and can enjoy playing games.

Apart from the eye-catching style, its comprehensive functions are also considered a major feature of Vivid. With the wireless controller, players can play games at their leisure. In addition, the Marco function registers complicated button combinations and performs movements with a single click. It helps a lot to complete boring routine tasks and use character ultimate moves. Shoot, the high-efficiency shooting mode, allows players to adjust aiming sensitivity according to their own conditions to optimize shooting efficiency. Additionally, it includes a three-stage Turbo button for burst firing, auto-wake, and a four-stage vibration adjustment, all of which are very useful features on the controller. Additionally, Vivid’s battery life is powerful, enabling gamers to play games for over 10 hours. With both charming style and complete functions, Vivid can meet various demands of various consumers.

Tired of the monotonous controller? Brook Vivid’s warm style design and comprehensive functions knock your socks off. Its freshness and beauty successfully capture the hearts of gamers.

2022-07-26
Previous Post: CAD and PLM Software Market Outlook 2022 to 2029 | Fusion 360, Solid Edge, Tinkercad, Ultimaker Cura, Simplify3d – This Is Ardee
Next Post: Burn baby burn! Damien Hirst will set fire to his own designs in the culmination of his NFT grant experiment “The Currency”